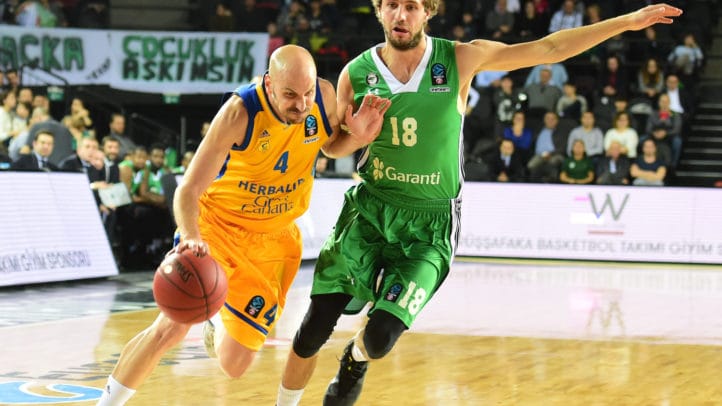 Darussafaka Istanbul continued its dominant start to the Top 16 by never trailing on Wednesday on the way to an 88-70 win over the visiting Herbalife Gran Canaria. Darussafaka took sole possession of first place in Group E with 2-0 record, while Gran Canaria dropped to 1-1.

The hosts started to break the game open in the third quarter with Kartal Ozmizrak playing a key role in a 16-2 run as Darussafaka opened a 20-point margin and cruised to victory. 7DAYS EuroCup top scorer Scottie Wilbekin led the way with 20 points. JaJuan Johnson had 15, Stanton Kidd netted 14, and Howard Sant-Roos finished with 10 points, 10 assists, 7 rebounds and 4 steals in victory. D.J. Seeley had 24 points, 6 rebounds and 6 assists for Gran Canaria, while Ondrej Balvin and Pablo Aguilar had 10 points and 7 rebounds apiece.

Darussafaka started strong right as Kidd sparked a 10-0 run with a pair of triple before Wilbekin’s driving layup made it 12-2. After a timeout, Marcus Eriksson hit a triple for Gran Canaria, but Johnson had a three-point play that extended the margin to 12 points. Aguilar had a layup and a triple to keep Gran Canaria in range, but Michael Eric scored 5 points to help Darussafaka hold a 24-11 advantage after 10 minutes. Darussafaka did not score a single basket for the first 5 minutes of the second quarter, however, and during that time Balvin and Oriol Pauli made runners and Eulis Baez scored a reverse layup for the visitors. Sant-Roos snapped the drought for Darussafaka, but Aguilar hit a triple and Seeley scored 6 points, including a baseline jumper, that gave the visitors a 28-30 lead. Kidd answered with a three on the other end and the teams traded baskets for the rest of the half, which Wilbekin ended by beating the buzzer with a long triple, making it 40-38 at halftime.

Wilbekin opened the second half with a three-pointer. Gran Canaria saw Pauli and Balvin score from close range, but a dunk from Furkan Aldemir and a runner from Will Cummings started a Darussafaka run during which Ozmizrak hit a triple then had a steal that led to an easy layup at 56-44. The hosts forced 3 consecutive turnovers as Wilbekin’s free throws opened a 61-44 gap. Balvin and Seeley helped the visitors get within 64-51 after three quarters, but baskets from Johnson, Wilbekin and Kidd made it 72-52 early in the fourth. Balvin and Seeley again cut into the lead, but the visitors never came closer than 13 points the rest of the way as a pair of big dunks by Johnson helped Darussafaka maintain a big lead to the finish.