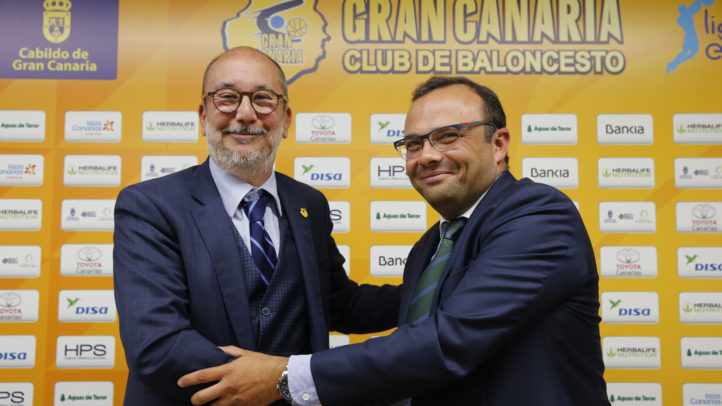 Formal introduction of the agreement with HMK Holdings LP

The legal representative of the American investment fund in Europe, José Lucas Cruz and the president of C.B. Gran Canaria, Enrique Moreno, explained the details of this new sponsor.

Both executives exposed the specifics and answered all the questions made by the journalists in the press conference room of Gran Canaria Arena.

“As this contract has a big relevance, my duty as president of the Club was to bring the agreement to the management board to approve it. We did the same before with the renewal with Herbalife”.

“The agreement of sponsorship is valued in one million euros, which 500.000 euros is paid for the remainder of this season and the other half depends on a future operation, that could be happen or not. This operation is the chance to acquire a block of shares if the Fundación Canaria del Deporte agrees to open this process”.

“We thought about this sponsorship with C.B. Gran Canaria because HMK needs a big advertising in Europe after the acquisition of several capital goods in the continent”.

“We have good faith and positivity with a team that I love, I am a ticket holder many years ago and we thought about the idea to improve the efficiency of the Club if we would have the chance in the future to acquire a significant share of the company”.