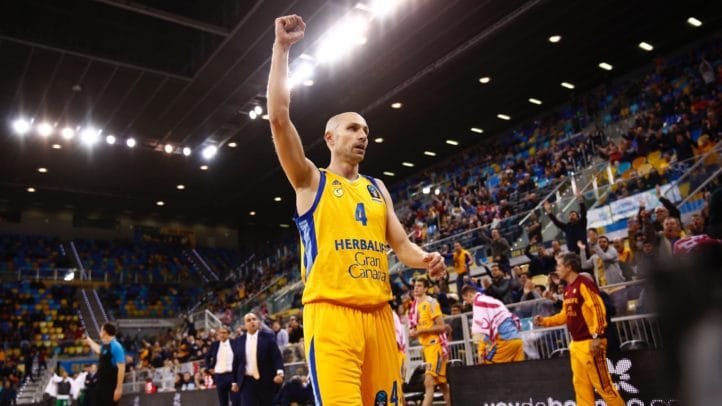 Herbalife Gran Canaria finished the 7DAYS EuroCup Top 16 in style by downing Darussafaka Istanbul 78-70 at home in Group E on Wednesday. Darussafaka, which finished atop Group E with a 5-1 record, saw its six-game winning streak come to an end. Coach David Blatt’s side will face Buducnost VOLI Podgorica in the quarterfinals. Gran Canaria, second in Group E at 4-2, will go against Lokomotiv Kuban Krasnodar.

D.J. Seeley led the winners with 23 points and Ondrej Balvin added 16. Okben Ulubay paced Darussafaka with 16 points, Stanton Kidd added 12 and Michael Eric 11. Eric shined early, but Balvin, Seeley and Anzejs Pasecniks helped Gran Canaria to a 22-20 edge after 10 minutes. Seeley, Albert Oliver and Pasecniks combined for 12 points in a 16-1 run highlighted by Gal Mekel’s buzzer-beating layup for a 45-29 Gran Canaria lead at halftime. Nothing changed after the break, as Gran Canaria improved its lead to 62-44 after 30 minutes and then again to 70-50 midway through the fourth quarter. Darussafaka only rallied once the outcome was clear.

Eric got Darussafaka going with a layup, but Luke Fischer and Xavi Rabaseda each dunked in a 9-0 run, which Nicolas Brussino capped with a jumper for a 9-2 Gran Canaria lead. Eric dunked in a 0-6 run that Furkan Aldemir capped with a tip-in. Three-pointers by Kidd and Scottie Wilbekin tied the game at 14-14. Seeley downed a jumper and free throws by Pasecniks and Balvin put Gran Canaria back ahead at 22-20 after 10 minutes. Seeley followed a jumper with a layup early in the second quarter and then erased Howard Sant Ross’s three-point play with a bomb from downtown for a 29-23 Gran Canaria advantage. Kidd and Muhammed Baygul brought Darussafaka a bit closer, 31-28, but Gran Canaria improved its defense and Pasecniks followed a layup with a jumper. Albert Oliver and Seeley hit free throws and a buzzer-beating coast-to-coast layup by Mekel boosted the hosts’ lead to 45-29 at halftime.

Kidd had 7 quick points after the break, but didn’t have help much help around. Meanwhile, Brussino and Fischer kept Gran Canaria way ahead, 52-36. Balvin followed a dunk with free throws to make it a 20-point game, 56-36. Ulubay and Will Cummings tried to change things for Darussafaka, but a layup by Seeley and a put-back slam by Balvin restored a 62-44 Gran Canaria lead after three quarters. Wilbekin hit a triple and Eric dunked, but Nikola Radicevic answered from downtown, Balvin downed a turnaround jumper and an alley-oop layup by Fischer sealed the outcome, 70-50, midway through the fourth quarter. Darussafaka kept trying, but Gran Canaria had cruised to a well-deserved and very convincing home win.