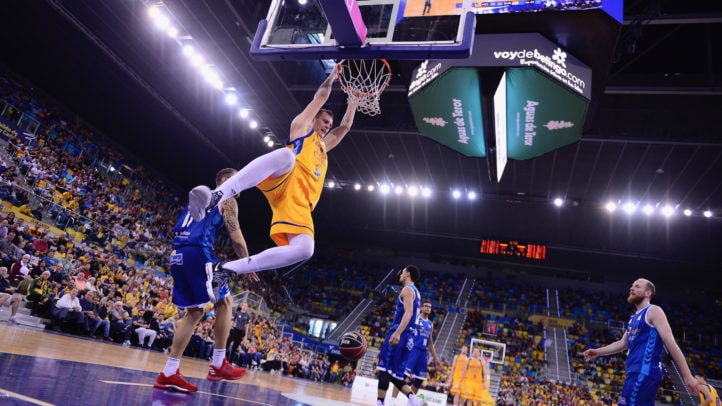 It was the first game of San Pablo Burgos in Gran Canaria Arena and they arrived after winning in Bilbao.

The team coached by Diego Epifanio started with a 5-0 run with Jenkins and Fisher commanding their offense. Herbalife Gran Canaria lasted more than two minutes without scoring any basket, but then Marcus Eriksson started a 12-0 run for the home team. The Swedish player and Oriol Paulí were the leaders of these minutes.

Despite of that, San Pablo Burgos competed really well like they did versus Valencia Basket and Real Madrid in the past, and they finished the first quarter really close in the scoreboard (22-16).

In the second quarter Xavi Rabaseda returned back from his injury with the National team with a three-point shot. Then, Sebas Saiz was strong in the paint for his team and Barrera was accurated from distance to equal the score in the 16th minute of the game (34-34).

In the next play, San Pablo Burgos grabbed the lead, but Herbalife Gran Canaria reacted well to end with a small lead the first half, where Jenkins and Eriksson highlighted.

Herbalife Gran Canaria needed to increase his intensity in order to break the game. But John Jenkins was unstoppable after the haltime and his team was again leading the game (61-64).

The last quarter was very serious again from both teams and with Herbalife Gran Canaria trying to recover the distance between them. With Balvin and Pasecniks toghether in the paint the comeback started.

Nine points in a row from the two big men were the key that let it happen. Balvin ended the game with great dominance with 13 points, 8 rebounds and 4 assists. But one more time San Pablo Burgos reacted to bring a close game (72-71) with five minutes left. That was the moment for DJ Seeley, the American player took responsability when the game was hotter, and scored six points in a row to grab a very important win in Liga Endesa.