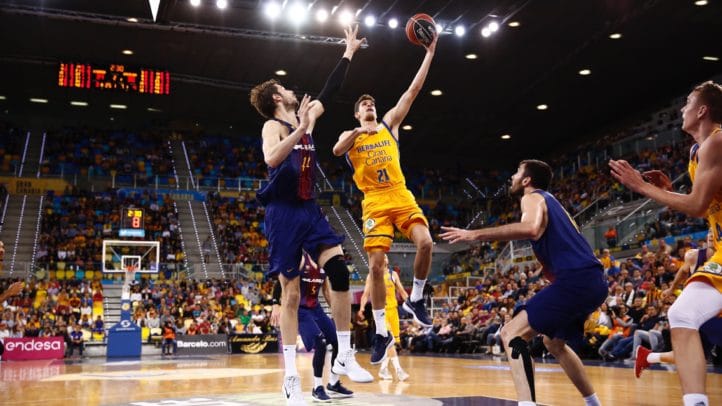 After a very closed first half, the visitor team played a great third quarter.

A great fight was expected in Gran Canaria Arena. Siete Palmas’ neighborhood awaited a big duel for the Playoffs between Herbalife Gran Canaria and FC Barcelona Lassa. The new Barça team of Svetislav Pesic was invictus until last week in Liga Endesa and the Grancanaria team wanted a win to reinforce his moral for the future.

The game started with a high rhythm and FC Barcelona proved their desire to win since the first minute. Thomas Heurtel, one of the hottest players in the league right now, started the game with a three and leading his team (8-12 minute 5).

The distance grew, but two threes from Rabaseda and Seeley avoided a higher deficit. The game was very closed until then and Herbalife Gran Canaria kept fighting in a battle with a very high level and accuracy.

In the second quarted, Radicevic was the main character thanks to seven points in a row (25-24 minute 13) to give his team the lead. Thomas Heurtel was the key for his team in these minutes and the great new came a little bit after when Oriol Paulí returned to the court after several months injured. Herbalife Gran Canaria dominated this quarter, but Barça kept it close until halftime (38-37).

Petteri Koponen began to show his great shooting in the second half. The Finnish player scored two threes in a row that broke the game in less than a minute. The visitor team was hot and several controversy decisions helped this great moment. Ondrej Balvin received a technial foul and the lead grow below the 10 points (48-59).

With the Radicevic’s leadership and Paulí’s energy the home team reacted to reduced the distance to six points, but Pau Ribas scored from three to complicate even more the accomplishment.

The run in this quarter was 20-30 for Barça and the mission was harder with the great moment they had. The Catalonian team dominated the rhythm in the las quarter, where Herbalife Gran Canaria tried it to be with only nine points of deficit, but Koponen again was the main problem for the yellow team.

The last five minutes of the game showed a willing Herbalife Gran Canaria that weren’t able to counterbalance the great shooting from FC Barcelona.

Svetislav Pesic’s team grabbed a win to be close to the top 4 teams in the Liga Endesa. Herbalife Gran Canaria is now at the seventh place one win above the ninth one.