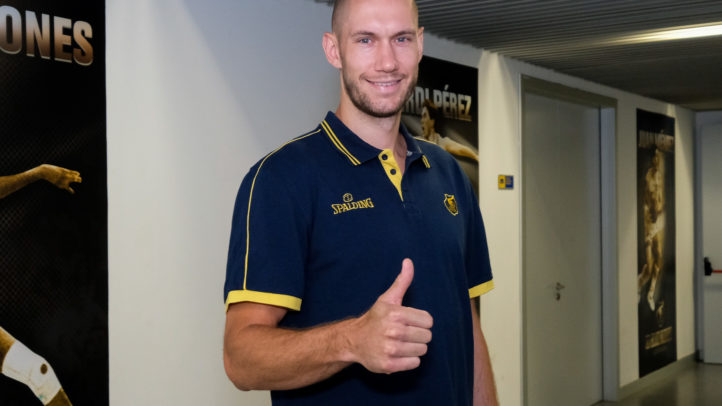 The French player was introduced to the media.

Kim Tillie was introduced to the media as a new player of Herbalife Gran Canaria. He showed a great enthusiasm to be a part of the club and said: “I’m very hungry to give my best for the team”.

Enrique Moreno, president of the club, and Sports Director Berdi Pérez, were also in the press conference. Both said that Tillie is a “very experienced player” that will help the team a lot.

“I want to thank the Club for the opportunity. It is a huge opportunity for me to come back to Spain and play in EuroLeague. I’ve had a rough year last season and I’m very hungry to give my best for the team. I have experience playing in ACB, EuroLeague, so I can help the team with what I’ve learnt”.

“I’m an all-around player. I can bring a lot of things, specially in defense. You have to defend in EuroLeague. Also I’ve improved muy three point shot”.

“I wanted to come to ACB because it’s the best league in Europe and also we are playing EuroLeague this season. That was my goal, to play at the highest level. I know Gran Canaria very well because I’ve played against them in a lot of occasions. I’ve had some ‘fights’ with Eulis Báez… Now we’ll be figthing together. I like the style of the team with a high paced game. The core is the same, there are some players that have been playing together for some time now.”.

“I underwent knee surgery about two and a half months ago. I’ve been working to be at 100% since the beginning of the season. I work hard during the summer. I have no doubt I will be once again at my highest level”.