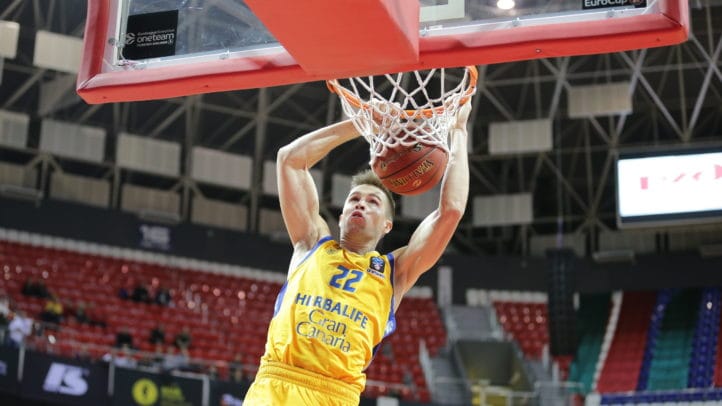 In a thriller than went down to the wire, Lokomotiv Kuban Krasnodar took a 1-0 lead in the best-of-three 7DAYS EuroCup Quarterfinals by edging Herbalife Gran Canaria 79-74 at home in Game 1 on Tuesday.

Gran Canaria hosts Game 2 on Friday and is now in a do-or-die situation. Dmitry Kulagin led the winners with 20 points, 7 of them in the final 3 minutes. Mardy Collins added 17, Brian Qvale 12 and Joe Ragland 10 for Lokomotiv. Xavi Rabaseda and Nikola Radicevic paced Gran Canaria with 11 points apiece and Gal Mekel added 10 for the guests. Both teams were without their top scorers, Ryan Broekhoff of Lokomotiv and Marcus Eriksson of Gran Canaria, due to respective injuries that will keep them out of the series. Early three-pointers by Rabaseda, Mekel and Radicevic gave Gran Canaria a 5-17 lead. Lokomotiv would get within 24-27 after 10 minutes but Pablo Aguilar and Mekel made 8 unanswered points as Gran Canaria regained a 39-47 halftime margin. Qvale capped an 8-1 Lokomotiv run with a layup at 59-59 late in the third quarter. Triples by Aguilar, Nicolas Brussino and Albert Oliver sustained a 65-70 Gran Canaria lead with under 4 minutes left, but Collins and Kulagin started an 8-0 run that Ragland finished with a triple for Lokomotiv’s first lead, 73-70. A dunk by Kulagin and a jumper by Collins kept Lokomotiv ahead, 77-74, with 11.9 seconds left and on its way to a 17th win in as many games in this EuroCup season.

Rabaseda and Mekel each struck from downtown to get Gran Canaria going. Radicevic added a reverse layup and Ondrej Balvin dunked in transition to make Lokomotiv call timeout at 2-10. An unstoppable Radicevic followed a layup-plus-free throw with a triple to make it a double-digit game, 5-17. Ragland rescued Lokomotiv with a three-point play and a driving layup but Eulis Baez and D.J. Seeley restored a 10-21 Gran Canaria lead. Kulagin and Qvale stepped up for Lokomotiv and Chris Babb struck from downtown at 22-27. Free throws by Collins fixed the score at 24-27 after 10 minutes. Frank Elegar scored twice around the basket early in the second quarter but a layup by Luke Fischer and a three-point play by Seeley gave Gran Canaria fresh air at 28-32. Evgeny Baburin buried a three-pointer before Aguilar and Mekel fueled an 0-8 run that gave the guests a 31-40 lead. Collins hit a triple and Kulagin added an off-balance basket but free throws by Balvin and a bomb by Rabaseda restored a double-digit that Qvale cut to 39-47 at halftime.

Babb downed a three-pointer and Qvale added a jump hook to give Lokomotiv hope at 44-49 after the break. Mekel sank a floater but Babb and Collins got the hosts even closer, 49-52. Rabaseda followed free throws with his third triple but he didn’t find much help around. Meanwhile, Kulagin and Collins made free throws and a layup by Qvale tied it at 59-59. A three-pointer by Aguilar restored a 59-62 Gran Canaria edge after 30 minutes. A jumper by Nico Brussino and a bomb from downtown by Albert Oliver boosted the guests’ lead to 61-67 with 8 minutes left. Brussino bettered Kulagin’s layup with a three-pointer but Ragland and Collins made it a three-point game, 67-70, with under 3 minutes remaining. Kulagin downed 3 of 4 free throws and a three-pointer by Ragland gave Loko its first lead, 73-70, with 1:30 left. Even though Radicevic answered from downtown on Gran Canaria’s next shot, Kulagin dunked to take back the lead. A free throw by Oliver kept Gran Canaria within 75-74 with 34.9 seconds left, but Collins downed a critical jumper, Oliver missed from beyond the arc and foul shots by Kulagin allowed Lokomotiv to celebrate the win.