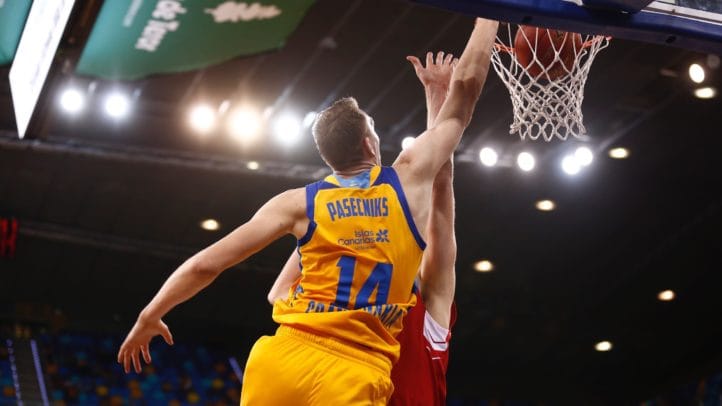 Lokomotiv Kuban Krasnodar is returning to the 7DAYS EuroCup Semifinals after blowing out Herbalife Gran Canaria 59-80 to complete a 2-0 sweep of their quarterfinals series.

Dmitry Kulagin poured in a career-high 32 points with 4 three-pointers and 12-of-12 free throw shooting for a career-high index rating of 34. Kulagin’s previous scoring record came in Game 1 of the series against Gran Canaria with 20 points. Frank Elegar added 11 points and 8 rebounds off the Lokomotiv bench and Trevor Lacey scored 10 points after totaling just 1 in his last two EuroCup games. The victory also extends Lokomotiv’s EuroCup winning streak to 18 games, the second-longest in EuroCup history. Gran Canaria exit the competition despite 12 points from Ondrej Balvin while Guy Mekel and Anzejs Pasecniks both scored 11.

Kulagin’s three-pointer put the visitors on the board first and Brian Qvale made it 1-5 before Balvin’s tip-dunk provided Gran Canaria’s first basket after more than 4 minutes. After baskets from Lacey, Eulis Baez hit 4 points at the other end as Gran Canaria went up 12-9. Lokomotiv evened the game and then got a triple from Lacey, only to see Mekel’s three-point play knot it 15-15 after 10 minutes. Another Lacey three-ball had the guests ahead 15-20 before a pair of dunks from Balvin and a Xavi Rabaseda three-pointer to cut the deficit to 23-25. Nicolas Brussino would even the game at 25-25 but Qvale and Kulagin combined for 7 points in pushing the advantage to 27-32. Balvin threw down another dunk and Baez converted 4 free throws down the stretch and the score was 35-37 at the break.

Lokomotiv really turned up the defense in the second half while getting enough offensive effort — especially from Kulagin, whose three- and four-point plays opened up a 35-49 lead. Mekel finally scored Gran Canaria’s first points of the second half after more than 6 minutes. Mekel scored again and Pasecniks added 3 points as the gap was 44-53. Kulagin started the fourth quarter with a three-pointer and Qvale made it 46-61. Gran Canania’s final push came as Pasecniks had two scores and Mekel’s steal and layup had the hosts to within 52-61. After a three-point play from Balvin, Gran Canaria was within 55-64. But Lokomotive held the hosts scoreless for 2 minutes and Kulagin had 2 free throws and a three-pointer to extend the lead to 55-74 with just over 2 minutes to play. Gran Canaria would not get closer than 17 points the rest of the way.