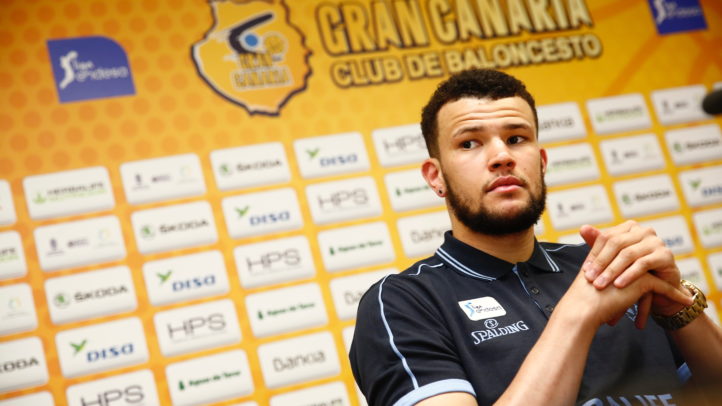 Luke Nelson: “There are guys that have been here for years that will help the new ones”

The British player was introduced to the media on Tuesday.

Luke Nelson was officially introduced in the Gran Canaria Arena. The British player arrived after one season on loan with Real Betis Energía Plus, and he showed his excitement for this opportunity.

“There were times that I thought that I played well when I showed what I can do. But then there was not enough of these moments. I was too inconsistent as a player myself and our team too. We struggled as a team, I take that as a learning experience. It was tough, but I learned a lot. I’m overall happy as an improvement and that experience will help me this year”.

“I’me really excited, I think we have a strong team. But as a team, you have to come together and right now we are individual players because we just met. There are guys that have been here for years that will help the new guys with the system and how to play as part of this team. They all good people and for the Club I heard that for the Club is important the person as the player as well”.

“I thought that I can be a solid scorer for this team. Also I am a solid team player and also a strong defender. I can guard in the two position pretty well because I have good length and quickness defensively”.

“I felt that in my career even as a junior every year I took a step up. Now is another opportunity. I have to prove you and my teammates that I’m ready”.

“My experience when I visited Gran Canaria was quite positive because the fans understood that I was a Gran Canaria player on loan and felt some support. I remember the atmosphere here was great, it was a close game and the atmosphere was incredible. Every player here is a strong player so I have a lot of respect for everyone on this team. I’m looking forward to play with them”.