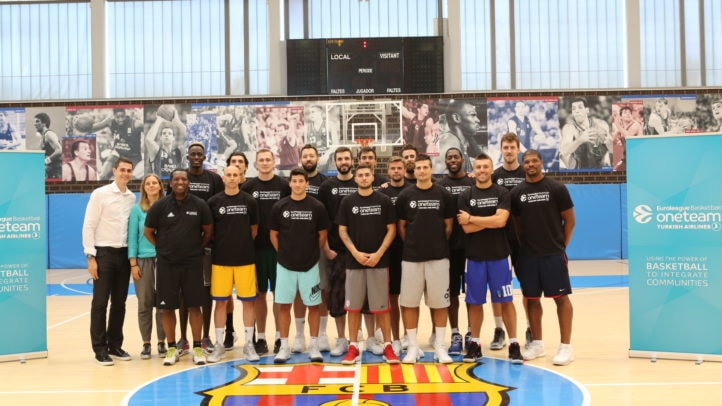 One Team session with star players tips off annual workshops

The EB Institute Annual Workshops tipped off on Monday with a very special session for One Team, the social responsibility program of the Turkish Airlines EuroLeague and 7DAYS EuroCup.

Players from each of the 16 teams competing in next season’s Turkish Airlines EuroLeague flew to the league’s headquarters in Barcelona to start off a busy schedule of meetings and sessions that will also involve coaches and club executives in the coming days.

The very first activity took place at FC Barcelona Lassa’s practice facility, where the players took part in a One Team introductory session to give them a greater understanding of how the program is helping at-risk communities all over Europe.

Some of the players have already been supporting One Team for many years, including the initiative’s Global Ambassador Kyle Hines of CSKA Moscow, and he is looking forward to another year of important and impactful events across the continent.

“This session was a perfect way for us to conclude one season and start to look forward to the next one with great motivation and anticipation for what One Team can achieve,” Hines said. “We learned a lot that we can take back to our own communities and have a big impact next season.”

Other players have signed up to become One Team Ambassadors for the first time, and Monday’s event in Barcelona allowed them to take part in a series of drills which demonstrate how the power of basketball can be used to change lives and integrate communities.

“This was my first experience of One Team and I learned that we can all try to help kids find the right way in life and avoid dangers,” Ognjen Kuzmic of Real Madrid said. “Opportunities to help people are around us all the time and as players everyone should take that responsibility every day.”

Furkan Aldemir of Darussafaka, who is preparing for his second season as a One Team Ambassador, said: “I was happy to spend time with kids last season. I could see in their eyes how happy they were and that showed me how basketball is not only a sport; it can also a have a big social impact. I want to help teach kids the right things from my experiences and I think the program will get bigger and bigger.”

Former EuroLeague champion David Rivers, now the One Team Manager for 7DAYS EuroCup club Tofas Bursa, led the session on behalf of Euroleague Basketball with the support of another ex-champ, Rodrigo De La Fuente, now fully involved with the Barça Foundation and its One Team program.

Rivers was delighted to have the opportunity to emphasize the messages of the program, saying: “It gave us a chance to reinforce what we’re trying to achieve and make the players conscious of the One Team message – using their power to help communities. We did some simple drills and games but when you break them down into the real-life elements you can see the expressions on the faces of the players change, as they became aware of the very simple messages they can take back to their communities.”

One Team, supported by Turkish Airlines as the One Team Founding Patron and with the collaboration of Special Olympics as Proud Partner, uses basketball to achieve meaningful social impact in our communities across Europe and is supported by every club in the Turkish Airlines EuroLeague and 7DAYS EuroCup.

Since its founding in 2012, the One Team program has already helped more than 14,000 participants through its various team-focussed projects.