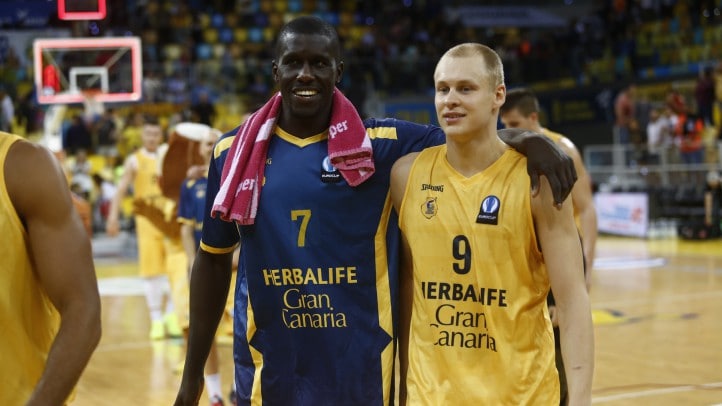 After trailing by 3 at halftime, Gran Canaria used a strong third quarter to take control and led by as many as 17 after a pair of Albert Oliver baskets to start the fourth quarter. Chris Lofton singlehandedly outscored Gran Canaria 2-13 early in the fourth quarter to give Le Mans a chance at 61-55, but the hosts used triples from Xavi Rabaseda and Kevin Pangos to ice the victory. Gran Canaria improved to 5-1 in Group B and following ALBA Berlin’s loss early in the evening now sits alone atop the group standings. The loss dropped Le Mans to 1-5. Alen Omic paced the winners with 18 points and 8 rebounds, Kevin Pangos scored 14 and Pablo Aguilar tallied 12 points and 9 boards. Lofton scored 23, Lahaou Konate 10 and Mouphtaou Yarou corralled 13 rebounds in defeat.

Le Mans scored the game’s first 7 points with Konate posting a basket-and-foul. Nearly four minutes passed before Sasu Salin’s three-pointer got Gran Canaria on the scoreboard. Omic narrowed the gap to 2 points, but Yarou responded to make it 7-11. Omic’s next basket tied the game and Aguilar’s tip-in gave the hosts their first lead, 13-11. Lofton tied it, but baskets by Aguilar and Omic lifted Gran Canaria to 17-13 after 10 minutes. Brad Newley stretched the difference to 6 at the start of the second quarter. Roberto Dozier converted free throws and a shot from downtown as Le Mans came back to tie the score at 20-20. The teams traded shots with Omic twice putting Gran Canaria ahead, but free throws by Tywain McKee and Lofton pushed Le Mans ahead 26-32. Rabaseda closed the gap to 29-32 at halftime.

Gran Canaria stormed ahead with a 10-1 run to start the second half, in which Omic and Pangos each scored twice. Pangos drilled a triple that stretched its lead to 48-39 midway through the quarter. Ovidijus Galdikas gave the hosts their first double digit lead. Gran Canaria had an answer for every Le Mans points and Albert Oliver’s three-pointer made it 55-42 through three quarters. Oliver scored the first two baskets of the fourth quarter to establish a promising 17-point advantage. Lofton scored the next 7 points and after a basket by Omic, Lofton buried back-to-back triple to bring the visitors within 61-55 with five minutes to go. A three by Pangos and Omic free throws gave Gran Canaria a 68-57 edge. Rabaseda’s triple all but sealed the outcome.