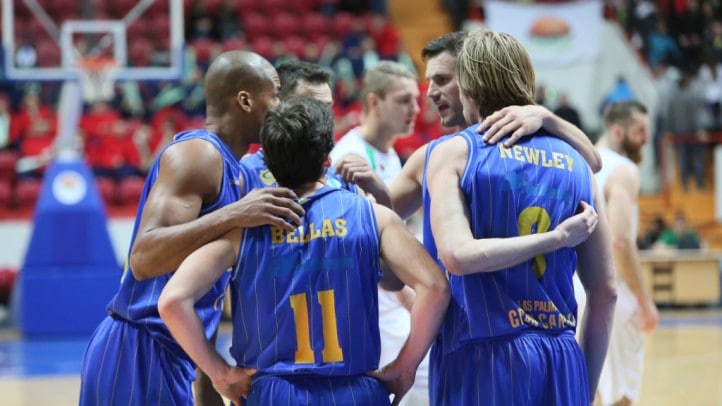 Herbalife Gran Canaria took a major step toward its first-ever Eurocup Finals appearance by downing Unics Kazan 70-83 on the road in Game 1 of the semifinals on Wednesday.

Herbalife Gran Canaria leads the two-game total-points series by 13 points and hosts Game 2 next Wednesday. Herbalife Gran Canaria became the second team to win 20 games in a Eurocup season, improving its record to 20-1. Unics finished the 2013-14 Eurocup season with a 20-4 record. Brad Newley, Eulis Baez and Walter Tavares led the winners with 12 points apiece. Tavares added 11 rebounds for a double-double – 8 of them at the offensive end. Ian O’Leary had 11 points while Tomas Bellas dished 9 assists for Gran Canaria. Sergey Bykov led Unics with 17 points and 8 assists. Curtis Jerrells added 15 points while James White had 11 for the hosts. Baez scored 5 points in a 0-9 opening run that Tavares capped with a jump hook. Three-pointers by Txemi Urtasun, Kyle Kuric and O’Leary boosted the guests lead to 11-26 after 10 minutes.

Bykov and Kostas Kaimakoglou stepped up for Unics early in the second quarter and brought the hosts within 24-31. Baez and Newley revived Gran Canaria and a dunk by Tavares gave his team a 34-43 lead at halftime. Tavares and Bellas ensured the guests kept a safe margin throughout the third quarter and a three-pointer by Kuric restored a 55-64 lead through three quarters. Tavares kept leading Gran Canaria, allowing the guests to seal a truly historic win.

Newley got Gran Canaria going with a fast break dunk and Baez followed a second-chance basket with a three-point play. A put-back jump hook by Tavares saw Unics call timeout down 0-9. Jerrells stepped up with free throws, but Newley erased them with a layup and Bellas made it a double-digit lead, 2-13. Dimitry Sokolov tried to change things with a tip-in that Urtasun bettered with a three-pointer. White and O’Leary exchanged free throws before a layup by Albert Oliver boosted the guests’ lead to 6-20. Jerrells and Kuric struck from downtown and even after White scored down low, a three-pointer by O’Leary gave Gran Canaria an 11-26 advantage after 10 minutes.

Levon Kendall sank a five-meter jumper early in the second quarter, but Bykov matched him at the other end. Kaimakoglou took over with a layup-plus-foul, which Kuric erased with a triple. Pavel Antipov and Rolands Freimanis each struck from downtown to get the crowd involved at 22-31. Bykov shined with a driving layup, but Baez did better with a three-pointer and a layup by Bellas gave Gran Canaria a 24-36 margin. O’Leary took over with an alley-oop slam, but Kaimakoglou and Jerrells kept Unics within 28-38. Newley hit one from beyond the arc, but Kaimakoglou and Bykov brought Unics a bit closer, 34-41. A dunk by Tavares fixed the halftime score at 34-43.

Bellas downed a step-back jumper right after the break, but White matched with a six-meter jumper before a layup by Bykov brought Unics within 38-45. Tavares found space for an uncontested slam, but D’Or Fischer answered with a wild dunk in traffic. Newley took over with a three-point play and an alley-oop dunk by Tavares boosted the guests’ lead to 41-52. White stepped up with a basket-plus-foul and Freimanis bettered O’Leary’s alley-oop layup with a triple. After Urtasun answered from downtown, Jerrells scored in penetration. A layup by Kendall kept Gran Canaria comfortably ahead, 49-59. Kuric hit another triple, but Fischer and Jerrells kept Unics within 55-64 through three quarters.

Tavares split free throws early in the fourth quarter and added a three-point play for a 55-68 Gran Canaria advantage. Aftre Bykov and Baez traded baskets, Sokolov split foul shots. A jumper by Kaimakoglou kept Unics within 60-70. Jerrells scored in a one-on-one situation and erased Urtasun’s five-meter jumper with a driving layup. Bellas and Kendall sank free throws to seal the outcome of the game, 64-77, with two minutes left. Obviously, both teams kept fighting for points until the final buzzer. Bykov took over with a four-point play but a layup by Baez and a huge dunk by Kendall allowed Gran Canaria to seal one of its biggest-ever wins in style.