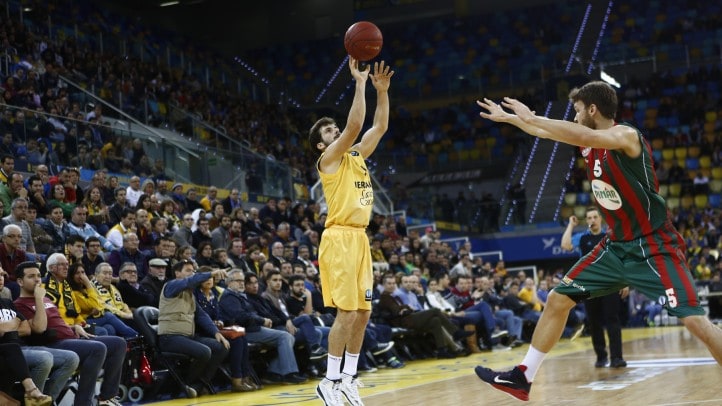 Herbalife Gran Canaria remained undefeated at home after 10 games and improved on to 18-1 in the Eurocup this season. Most importantly, it took a 10-point lead in a series that now travels to Izmir for Game 2. Albert Oliver paced the winners with 17 points. Kyle Kuric added 14, while Brad Newley had 12 for Herbalife Gran Canaria. Juan Palacios led Karsiyaka with 18 points. Bobby Dixon added 14, D.J. Strawberry 12 and Jon Diebler 10 for the guests.

Oliver and Kuric helped Herbalife Gran Canaria overcome a slow start and Levon Kendall gave the hosts a 22-17 lead after 10 minutes. Strawberry and Dixon took over early in the second quarter to helpd Karsiyaka tie the game, 28-28. An outstanding Palacios and a buzzer-beating layup by Dixon tied it again, 42-42, at halftime. A three-pointer by Diebler gave the guests a 50-51 edge midway through the third quarter, but Eulis Baez and Newley led Herbalife Gran Canaria to restore a 57-55 edge after 30 minutes. Newley and Oliver took over midway through the fourth quarter, as Karsiyaka struggled to score when it mattered most. A big three-pointer by Oliver and a tip-in by Kendall gave Gran Canaria a double-digit lead in the series.

Dixon banked in a three-pointer to get Karsiyaka going and free throws by Palacios soon gave the guests a 0-5 lead. Tomas Bellas took over with a layup off a long inbound pass and Kuric followed a jumper with a triple for a 7-5 Herbalife Gran Canaria edge. Diebler hit a one-handed jumper in the lane and erased Walter Tavares’s layup with free throws, but a three-pointer by Oliver put the hosts back ahead, 12-9. Kenny Gabriel took over with an outstanding dunk, but Oriol Pauli and Baez made foul shots. Erkan Veyseloglu nailed a jump hook, however another triple by Oliver boosted Herbalife Gran Canaria’s lead to 18-13. Dixon sank free throws and matched Pauli’s alley-oop slam with a driving layup. A tip-in by Kendall restored a 22-17 Herbalife Gran Canaria lead after 10 minutes.

Kuric sank a mid-range jumper early in the second quarter, which Strawberry bettered with a three-point play. Dixon struck from downtown to bring Karsiyaka within 24-23. Oliver and Strawberry exchanged baskets and Baez caused the guests to call timeout at 28-25. Strawberry, Txemi Urtasun and Diebler each hit from beyond the arc. A dunk by Tavares gave Herbalife Gran Canaria a 33-31 edge. Kuric struck from downtown, but Palacios followed a layup with a fadeaway to make it 36-35. After Newley hit a triple, Palacios answered with a three-point play and got help from Baris Hersek and Dixon to tie it, 42-42, at halftime.

Newley took over with a reverse layup immediately after the break, but Dixon erased it with a step-back jumper and free throws by Hersek put the guests back ahead, 44-46. Tavares took over with a put-back slam, but Palacios scored again. A layup by Baez tied it at 48-48. Kuric ignited the crowd with a dunk that Diebler bettered with a three-pointer. Oliver stepped up with a jumper and another close basket by Baez caused the guests to call timeout at 54-51. After Veyseloglu hit free throws, Newley shined with a layup-plus-foul and a driving basket by Strawberry kept Karsiyaka within 57-55 through three quarters.

Tavares shined with a put-back basket early in the fourth quarter. Gabriel answered with a put-back slam but free throws by Ian O’Leary made it a four-point game, 61-57, with 7 minutes left. Oliver nailed a six-meter jumper, Palacios dunked and a three-point play by Newley caused the guests to stop the game at 66-59. Palacios hit a six-meter jumper, Kuric took over with a fast break slam and a running jumper by Oliver gave his team a 70-62 margin with two minutes left. After Baez split free throws, Palacios scored a layup, but a huge triple by Oliver made it a double-digit game, 74-64, with a minute left. Kendall stepped up with a tip-in and a layup by Strawberry brought Karsiyaka within 76-66 seconds before the final buzzer.