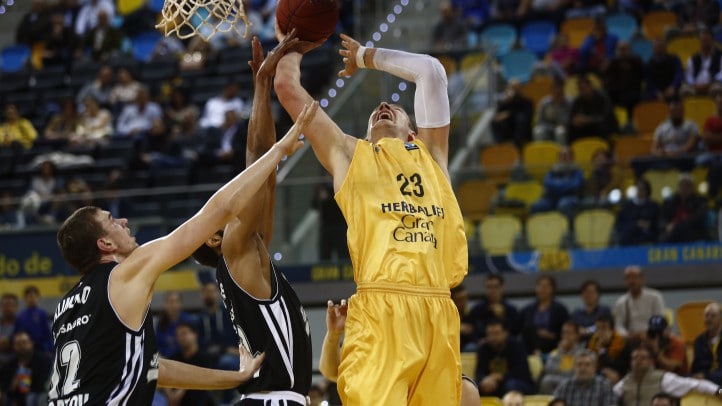 Brad Newley scored 17 points in the win while Xavi Rabaseda and D.J. Seeley both had 13, Pablo Aguilar scored 11 points and Albert Oliver chipped in 8 points and 11 assists. Jeremy Chappell scored 14 points, but they were not enough as Avtodor fell to 1-2 in the group. Jeff Brooks added 12 points and Denys Lukashov scored 11 points.

Artem Klimenko opened the game for the visitors, who lead 0-4 before Sasu Salina’s three-pointer got Gran Canaria on the board. Omic gave the home side its first lead, 5-4. The lead switched hands seven times in the next four minutes with Chappell’s basket starting a 0-7 run for Avtodor, which went up 16-22. Rabaseda hit a three-pointer and Seeley trimmed the gap to 23-24 after 10 minutes. Aguilar pushed Gran Canaria back ahead before a Chappell triple put the visitors back in front. Gran Canaria held Avtodor to just 1 basket in the next 4:32 minutes and Seeley and Oliver both hit from downtown for a 35-31 lead. Lukashov eventually knotted the game 40-40 with a three-pointer and after two more ties, Anzejs Pasecniks’s three-pointer at the buzzer left Gran Canaria ahead 50-44 at the break.

Omic and Newley scored early in the second half to increase the gap to 54-46. Another Newley bucket put Gran Canaria up 56-47. Lukashov answered with a three and Klimenko got the deficit down to 56-52. But Avtodor failed to score for two minutes and the margin swelled to double digits, 62-52. Back-to-back three-pointers from Aguilar and Newley increased the advantage to 70-56. After an Avtodor timeout, Artem Zabelin knocked down a three-pointer and the Gran Canaria lead was 73-62 after 30 minutes. The hosts scored the first 4 points of the fourth quarter to increase the advantage to 15 points. Back-to-back baskets from Chappell pulled Avtodor to within 80-69 with seven minutes left. But Gran Canaria responded with a 9-0 spurt and the gap was 89-69 with five minutes to play before Evgeny Kolesnikov’s free throw snapped the run. Gran Canaria did not let Avtodor cut into the deficit for a better result; 19 points was as close as the visitors would get.