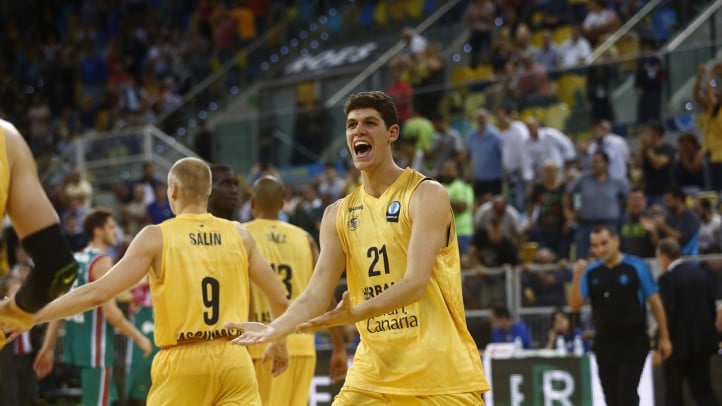 The hosts trailed 55-61 midway through the fourth quarter when Pangos and co. stepped up. The victory saw Gran Canaria bounce back from a rare loss and improve to 4-1 to retain at least a share of first place in Group B at the midway point in the Eurocup Regular Season. It also extended the teams’ winning streak in regular season home games to 13. Reggio Emilia dropped to 3-2. Alen Omic paced the winning attack with 17 points and 10 rebounds, while Sasu Salin added 13 points, Eulis Baez 12 and Pangos compiled 10 points and 6 assists. Pietro Aradori led Reggio Emilia with 12 points, Amedeo Della Valle scored 11 and Achille Polonara and Andrea Di Nicolao netted 10 each.

Brad Newley put the first points on the scoreboard for the hosts before Aradori started Reggio Emilia’s account. A pair of Della Valle three-pointers gave the visitors a 3-8 advantage and despite a pair of buckets inside by Omic, Reggio Emilia’s guard next three made it 7-13. Darjus Lavrinovic connected from downtown to extend the lead to 8. Oriol Pauli came off the bench to score 5 quick points and narrow the gap to 19-20. Despite free throws by Anzejs Pasecniks and Sitapha Savane to tie the score, Reggio Emilia got another triple from Polonara to lead 23-26 after 10 minutes. Aradori and Polonara re-solidified the visitors’ lead at 25-32 early in the second quarter, but a Sasu Salin triple sparked a 7-0 Granca push to even the score. Xavi Rabaseda pushed the hosts ahead by 2 only for Aradori to tie the game at 36-36 at halftime.

Omic free throws and a Pablo Aguilar three-pointer gave the hosts a promising start to the second half. Omic netted 2 more from the line for a 49-43 advantage midway through the third quarter. However Polonara nailed a three and Aradori scored again to cut the deficit to a single point. After Baez and Rimantas Kaukenas traded baskets, the scoreboard showed 53-53 through three quarters. The lead changed hands on the first two baskets of the fourth quarter before back-to-back threes by Stefano Gentile and Ojars Silins – the second of which came with a foul – made it 55-61 midway through the fourth quarter. Pangos connected from downtown to ignite what turned into a 14-0 march that would decide the game. He added another three and 2 free throws in the run that also saw Baez score twice. Still Silins’s three gave Reggio Emilia hope at 69-64, but after Baez free throws and another three by Salin, the difference was 10 with a minute to go and the hosts could start to celebrate.