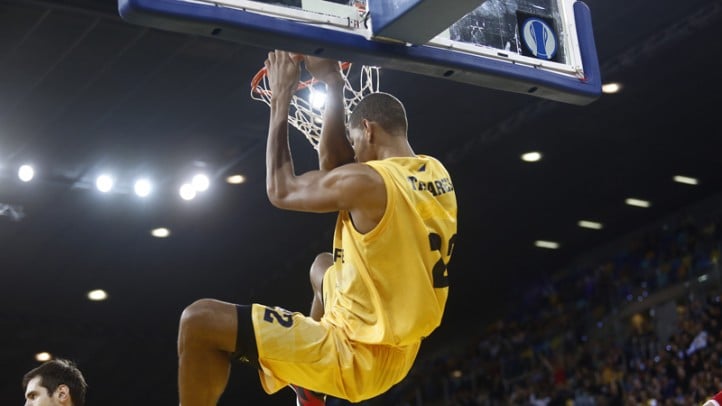 Herbalife Gran Canaria returned to the Eurocup quarterfinals for the first time since 2011 by downing Cedevita Zagreb 75-72 at home on Wednesday.

Herbalife Gran Canaria swept the two-game series and will face Pinar Karsiyaka in the quarterfinals. Kyle Kuric led the winners with 20 points. Brad Newley added 15, Ian O’Leary had 13 while Tomas Bellas dished 9 assists for Herbalife Gran Canaria. Stanko Barac led Cedevita with 13 points. Roko Ukic added 11 and 7 assists while Tomislav Zubcic had 10 points for the guests. Cedevita had a strong start and a layup by Nemanja Gordic gave the guests a 9-15 lead. Herbalife Gran Canaria found a go-to guy in Kuric, who brought the hosts within 16-19 after 10 minutes and put his team back ahead, 30-28, midway through the second quarter.

Eulis Baez got Herbalife Gran Canaria going with a three-pointer and free throws but Ukic stepped up with a triple and a jumper by Ivan Ramljak tied it at 5-5. Newley shined with a driving layup which Marko Arapovic matched with a jump hook. Newley scored again and a three-pointer by Zubcic gave the guests their first lead, 9-10. Marko Tomas also struck from downtown and a backdoor layup by Gordic made Gran Canaria call timeout at 9-15. Kuric hit free throws and bettered Tomas’s basket with a three-pointer for a 14-17 score. A second-chance layup by Miro Bilan and a jumper by Kuric fixed the score at 16-19 after 10 minutes. Albert Oliver his a four-meter jumper early in the second quarter and a three-pointer by O’Leary made Cedevita call timeout at 21-19. Bilan scored down low, Newley ignited the crowd with an alleyoop layup but Barac put Cedevita back ahead, 23-25. Kuric hit a technical free throw and a couple of three-pointers to make Herbalife Gran Canaria regain the lead, 30-28. Bellas fed Newley for a layup which Barac erased with foul shots. O’Leary shined with an alleyoop slam but Ukic scored in penetration and a layup-plus-foul by Barac gave the guests a 34-35 edge. Tavares and O’Leary allowed Herbalife Gran Canaria to get a 40-39 edge at halftime.

Pilepic hit a three-pointer right after the break and a jumper by Barac gave Cedevita a 40-44 edge. Tavares took over with a wild alleyoop dunk which Ukic improved with a three-point play. Kuric scored again and a three-pointer by Newley tied it at 47-47. Arapovic downed a six-meter jumper but Levon Kendall answered with a layup-plus-foul. Bilan made free throws, O’Leary took over with a slam and a big basket but Mario Delas kept Cedevita within 54-53. Newley and Kendall took over late in the third quarter but a buzzer-beating layup by Gordic kept Cedevita within 61-56 after 30 minutes. Zubcic and O’Leary exchanged baskets early in the fourth quarter. Zubcic kept pacing Cedevita with a four-meter jumper and soon added a corner triple to keep his team within 65-63 with over 6 minutes left. Kuric and Gordic traded baskets and free throws by Pilepic gave the guests a 67-68 edge with 4 minutes left. Bellas hit foul shots and Kuric beat the guests’ zone defense with a fallaway jumper. A driving layup by Oliver sealed the series’ outcome, 73-68, but both teams kept fighting for a prestigious win. Herbalife Gran Canaria rounded a great series with yet another home win.