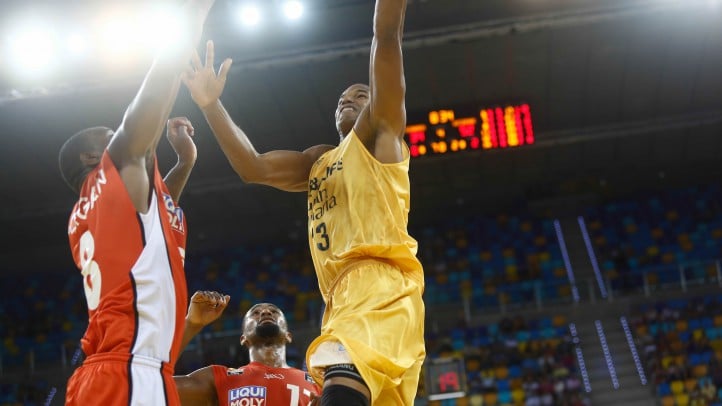 Herbalife Gran Canaria struggled to score since the beginning. In the first five minutes only Brad Newley had scored a layup. Meanwhile, the effort in defense was being good from Aito Garcia Reneses’ players but Ratiopharm Ulm managed to take a lead. After one quarter, the difference was seven points (9-16).

Ratiopharm Ulm kept making a strong defense and with a 0-5 run they took an eleven-points lead. Albert Oliver from the free throw line kept Herbalife Gran Canaria below the ten points disadvantage at halftime (18-29).

Kevin Pangos and Ovidijus Galdikas were making their debuts at home and did well -especially the Lithuanian center, who ended with 13 points and 7 rebounds, numbers that made him the best local player of the day. It was him, after Pangos making two threes, who helped the most in a little Herbalife Gran Canaria run. It was 30-38 for the German team. They didn’t give a chance to the yellow team and DeAndre Kane was a key factor with his late threes.

Kane put on a show with some three points shots and some layups. He ended up with 16 points -all of which came in the second half. At the end it was 51-66 for Ratiopharm Ulm. Now, Herbalife Gran Canaria will travel to Burgos to play Valencia Basket next Saturday.