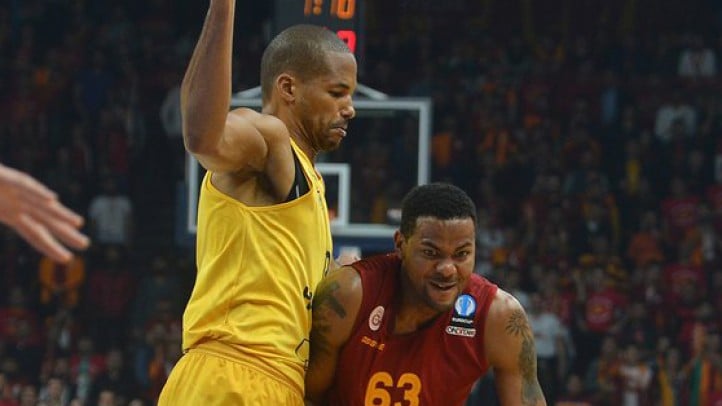 Chuck Davis amassed 18 points, 10 rebounds and 4 assists and Errick McCollum also scored 18 for Galatasaray, which takes a 14-point cushion into the decisive return leg next week in the Canary Islands. The game was close for much of the first half, but the hosts pushed ahead by 7 at halftime and used a 12-2 charge early in the third quarter to pull away for good. The difference reached 19 on multiple occasions before Gran Canaria fought back in the fourth to get within 10, but the hosts scored the final two baskets of the game. Galatasaray dominated inside by outrebounding the visitors 43-34 and making 68.2% of their two-point shots. Vladimir Micov added 15 points and 6 assists, Stephane Lasme scored 14 on 7-of-8 shooting and Goksenin Koksal made 3 of 6 three points for 13 points. Alen Omic paced Gran Canaria with 15 points, Eulis Baez scored 12 and Pablo Aguilar 11.

Micov scored the game’s first 5 points as Galatasaray jumped out to a 9-2 start. Despite a Sasu Salin triple, Sinan Guler put the hosts ahead by 8. However a second Salin three got Gran Canaria on track. Guler connected from downtown to make it 17-10, but Brad Newley and Aguilar keyed a 0-6 Gran Canaria run. D.J. Seeley tied it with free throws and Omic evened the score twice, but each time Galatasaray nosed back in front. Davis scored on the offensive glass to give the hosts a 3-point edge, but Xavi Rabaseda had Gran Canaria within 25-24 after 10 minutes. Omic scored twice early in the second quarter to give the visitors their first lead, 27-28. The teams traded points – and the lead – with Rabaseda providing a highlight with a chase down rejection of McCollum. After Newley tied the game at 35-35, Lasme and Micov shined at both ends to push Galatasaray ahead 43-37 after a basket-plus-foul from Davis. Baez sandwiched 5 points around a McCollum triple, but Blake Schilb’s first basket of the game ended the half with the hosts in control 49-42.

Baez remained hot with a three to start the second half, but Galatasaray took charge as Lasme and Micov each scored twice in a 12-0 run for a commanding 61-45. Baez added another triple, but McCollum responded in kind. Aguliar and Koksal traded threes. A second Koksal triple extended the difference to 19. Omic’s first basket of the half ended the third quarter at 73-56. Kevin Pangos connected from downtown early in the fourth, but Micov countered with another three. An Agular three – his third – and Seeley free throws chipped away at the deficit. Albert Oliver drained a triple to make it 83-71 with less than three minutes remaining. Omic and Newley further closed the gap to 10, but in the final minute, McCollum and Davis pushed the difference back to 14.