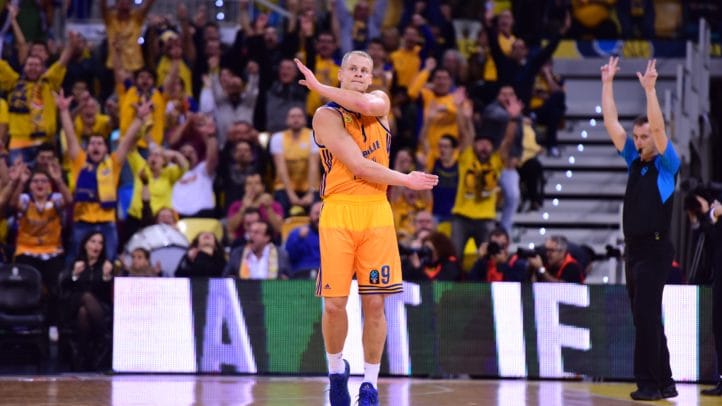 It was a great team effort to achieve another year the quarterfinals in the 7DAYS Eurocup.

The fans responded to the call of Luis Casimiro in the day before the game. Since the first play, the chants of the crowd gave energy to the players who respond them with great plays and effort.
The beginning of the game was remarkable for the home team with a 13-3 run in the first minutes. Jota Cuspinera called a timeout that helped his team to get close in the scoreboard. The first quarter ended with 26-19. In the second quarter came the best minutes of Montakit Fuenlabrada with explosiveness and quickness and a great performance from their new big guy Rafa Hettsheimeir. The first half ended with a basket from Ivan Paunic in the last second to put equalize the game (47-47).

The next ten minutes were crazy. The fans cheered up with every action better than the previous one. Herbalife Gran Canaria grabbed a 17-2 run with an outstanding defense and running the court with Royce O’Neale as the main character. Sasu Salin continued his fgreat shooting performance and Anzejs Pasecniks forgot his foul problems and was a wall in the zone for Fuenlabrada men.

Cuspinera’s team fought back and returned to the game with a three from Roland Smits (76-69) with eight minutes to play. Albert Oliver appeared to control the pace of the game and O’Neale nailed a three from downtown to confirm his great night and cut all the chances from the visitors. The forward finished the game with 19 points, seven rebounds and six assists.

Herbalife Gran Canaria reached the quarterfinals for the third year in a row, where Hapoel Jerusalem waits.