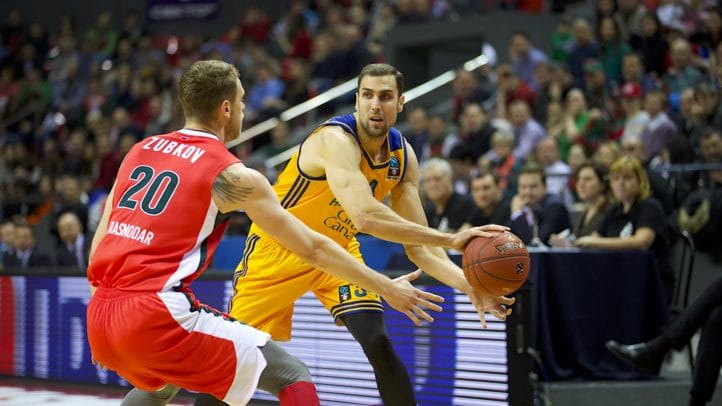 The win was Gran Canaria’s third in a row to improve to 3-2 and into second place in Group E of the Top 16. Gran Canaria will advance to the quarterfinals if Montakit Fuenlabrada wins its game later Tuesday. Despite the loss, which was Lokomotiv’s first in the Top 16 and took its record to 4-1, the club cinched first place in the group and home-court advantage in the quarterfinals. The visitors turned a 12-point second-quarter deficit into a 10-point fourth-quarter lead, but Mardy Collins scored 8 in a 10-0 run to tie the game at 66-66 with a minute remaining and set up a tense finish. McCalebb and Kyle Kuric scored 13 points apiece and Anzejs Pasecniks added 12 points for the winners. Collins posted 12 points and 9 rebounds, Matt Janning made 4-of-5 three-pointers for 12 points and Ryan Broekhoff added 10 points in defeat. Lokomotiv made 8 of 10 three-pointers (80%) in the first half, but was 3 of 12 (25%) from downtown the rest of the way.

The team was close from the start and neither team led by more than a basket until Evgeny Baburin’s three-pointer gave Lokomotiv a 22-18 edge. The teams kept trading shots, but another Baburin three and the third from Janning ended the first quarter at 28-22. Kevin Jones stretched the margin to 8 at the start of the second quarter and Andrey Zubkov’s put-back made it 36-27 midway through the second quarter. Janning added another three and Ian Vougioukas scored inside to extend the margin to 12. Albert Oliver hit a three that sparked a 0-7 push and Darko Planinic split free throws to close the gap to 43-37 at halftime. Eulis Baez hit a three in a 0-9 run early in the third quarter as Gran Canaria took the lead, 44-46. Vougioukas tied it, but Gran Canaria rolled to a 7-pointlead after Xavi Rabaseda drilled a three and Pablo Aguilar twice split free throws. Zubkov also split free throws at the other end to make it 50-56 through three quarters. Lokomotiv closed the gap to 4 three times before back-to-back threes by Royce O’Neale and McCalebb gave the visitors a double-digit advantage, 56-66. Collins took charge with a pair of threes among his 8 points in a 10-0 run to tie the game at 66-66 with over a minute to go. After missed shots at both ends, McCalebb put Gran Canaria ahead with 2 free throws with 7.7 seconds remaining and on the final play, Gran Canaria played excellent defense to deny Lokomotiv players a clear look at the basket.