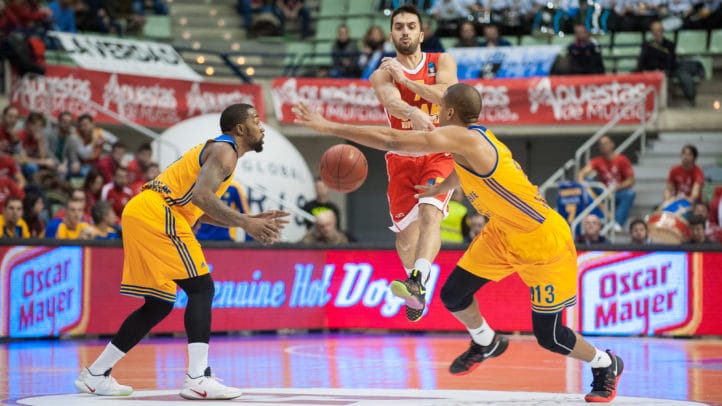 Herbalife Gran Canaria climbed into second place in Group E with a 67-83 road win at UCAM Murcia on Wednesday. Gran Canaria improved to 2-2 with its second straight victory over Murcia, which fell to 1-3. The visitors used a pair of 0-10 first-quarter runs to take control and led by as many as 28 before easing up. BoMcCalebb led the winners with 15 points, Richard Hendrix and Kyle Kuric scored 14 apiece and Royce O’Neale added 12. Vitor Benite made 4 of 7 three-pointers en route to a game-high 21 for Murcia, while Billy Baron tallied 14 points and 6 assists and Facundo Campazzo scored 11, but committed 7 turnovers.

Murcia led early thanks to threes by Campazzo and Nemanja Radovic, but O’Neale had 8 in a 0-10 Gran Canaria run that gave it the lead for good. After Benite made it 12-16 with a triple, the visitors got threes from Kuric and Albert Oliver in another 0-10 charge for a 12-26 advantage after 10 minutes. Benite tried to lead the Murcia resistance, however Hendrix scored 6 in a 0-9 Gran Canaria push to end the second quarter that made it 21-44 at the break. The visitors took the difference to 28 with the first 5 points of the second half. Bemite continued to score and Baron got involved as Murcia made a push and closed the gap to 45-61 at the end of the third quarter and then to within 13 after a Pedro Llompart triple the start of the fourth quarter. But Gran Canaria never let the margin shrink more than that and the difference hit 20 thanks to McCalebb with three minutes left as Gran Canaria closed out the victory.

«We played a great first half with good defense and good shooting percentages. We played from our defense with fastbreaks. I am very happy with our first half. In the second half, UCAM Murcia reacted by shooting great from the three-point line, but we managed to control the game with good defense. We will try to compete now in Krasnodar and that is our main goal right now. Go game by game and let’s see if we do things right if we can advance to the next round.»