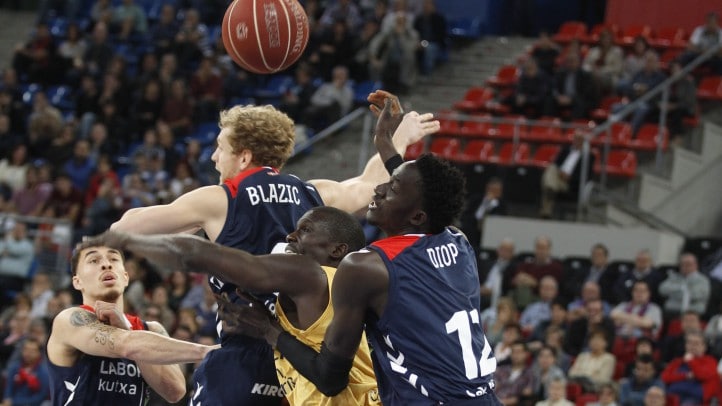 The yellow team fell short in Fernando Buesa Arena and could not get the win.

Herbalife Gran Canaria faced Laboral Kutxa Baskonia in a clash of undefeated teams. Both teams had won the first three games and wanted to kept on a roll in a big game.

Kyle Kuric could not participate because of a serious headache and Aíto García Reneses had to improvise with Brad Newley also injured. The Australian Small Forward did play some minutes but he wasn’t at his best. With all, Herbalife Gran Canaria was in charge in the first minutes thanks to a great teamwork. After the first quarter, though, Laboral Kutxa was winning by just one point. The lead did not get much bigger in the second act with Herbalife Gran Canaria making some shots -it was 38:36 at halftime.

Baskonia’s captain Fabien Causeur hadn’t had a good morning so far with a total of zero points in the first half. Suddenly, the French player was key in the third quarter scoring 13 points with three baskets from beyond 6,75 line. Baskonia had an eight points lead but Oriol Pauli with a three kept the difference in just 4 points. Herbalife Gran Canaria fought hard until the very end, with Paulí being key in the last minutes. The youngster dunked all over Bourousis and the defense of Laboral Kutxa and also had a crucial steal, but it wasn’t enough and in the end Laboral Kutxa won by ten points, 77:67.