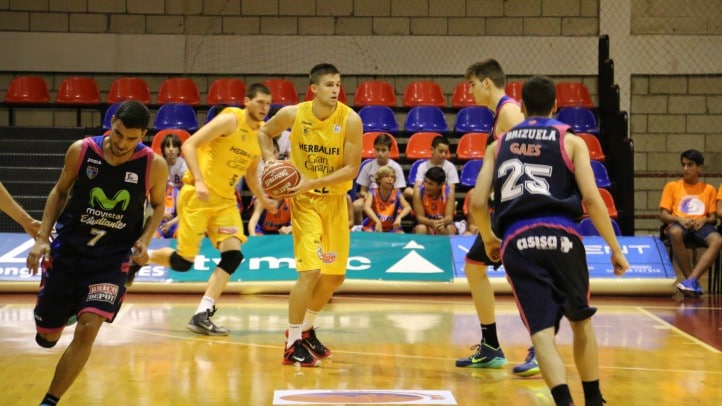 Aito Garcia Reneses had to improvise in the first preseason game of the summer due to the abscenses of the international players. Neither Sasu Salin, Alen Omic, Eulis Báez nor Pablo Aguilar could play so Coach Aíto decided to put the youngster Anzeks Pasecniks in the starting lineup. Along him were the signings Kevin Pangos and Sitapha Savane, as well as Kyle Kuric and Oriol Pauli -both of them are starting their second season in Gran Canaria.

It didn’t seem like both teams were in the early stages of a preseason. The high pace and high percentage in the shooting were the keys of the first minutes as Herbalife Gran Canaria and Movistar Estudiantes scored a lot. Kevin Pangos and Kyle Kuric were the best for the yellow team, but U20 Juancho Hernangómez did it great for his team. Gran Canaria got a nine-points lead but at the end of the quarter the advantage was only of five (30-25).

Herbalife Gran Canaria’s bench proved its worth in the first minutes of the second quarter. Xavi Rabaseda and Brad Newley gave the team an intensity they needed, but Movistar Estudiantes kept scoring. Ovidijus Galdikas, who was debuting as a yellow player, made an impressive effor in the paint and blocked 6 shots during the night. Him and Pangos, who finished with 17 points and 5 assists, maintained Herbalife Gran Canaria with the lead at halftime (51-46).

After the break, the islanders made a 9-0 run that put them with an eleven-points lead. Youngster Willy Isiani made a great effort and all the bench players brought a lot of energy whenever they had to play. Movistar Estudiantes struggled to keep the pace up as they saw how Herbalife Gran Canaria flew away (72-58).

Aíto García Reneses players enjoyed themselves in a great last quarter. All the players had their opportunity to showcase their talent and showed a great chemistry on the court. Kevin Pangos, Ovidijus Galdikas and Kyle Kuric were the best in the boxscore.