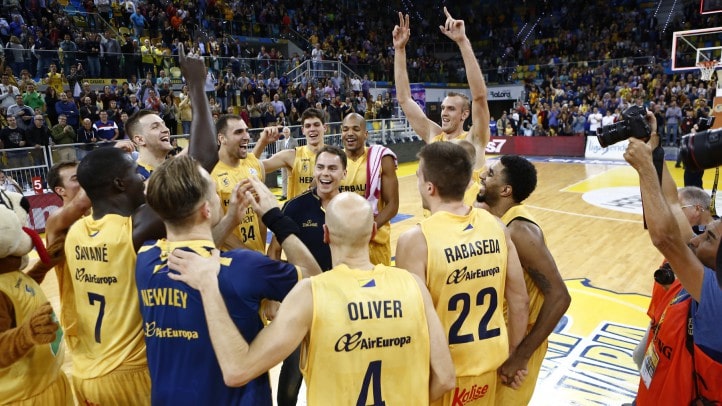 What a way to close the year at Gran Canaria Arena -Herbalife Gran Canaria defeated Unicaja by 33 points in one of the best games of the season.

After a very important win in Murcia, Herbalife Gran Canaria had to play Unicaja. The green team had to win after losing at Zaragoza if they wanted to secure a King’s Cup spot. In that fight to be one of the best 8 teams after the first leg Herbalife Gran Canaria was in a very good position and getting a win versus Unicaja would be huge for them.

It was a special night since the beginning because of the return of Kyle Kuric. After recovering from a brain tumor the 26-years-old player decided to came back to Gran Canaria and try to get back to the courts in a few months. He got a standing ovation from near 7.000 fans and the game was off.

Herbalife Gran Canaria was off to a really good start but Unicaja showed how great they are -despite of their problems at Liga Endesa they were one of the best teams in Euroleague’s first round. After a quarter Granca was winning by only one point.

Then Herbalife Gran Canaria had a crazy, crazy second quarter. The islanders scored 35 points in just 10 minutes with a lot of threes, an impressive energy at the back end and really good ball movement. DJ Seeley scored 9 points with 3 of 3 from the arc and everyone who was in the court added points, rebounds or assists.

Nothing changed in the second half. Af halftime Herbalife Gran Canaria was winning by 25 points (59:34) and the difference grew after that. Kevin Pangos was once again brilliant and everyone contributed to an amazing game -the best way to close the year at home and the best way too to welcome home Kyle Kuric.

Herbalife Gran Canaria is now in 5th position of the league with a 8-4 record and have a three games margin with the 9th.