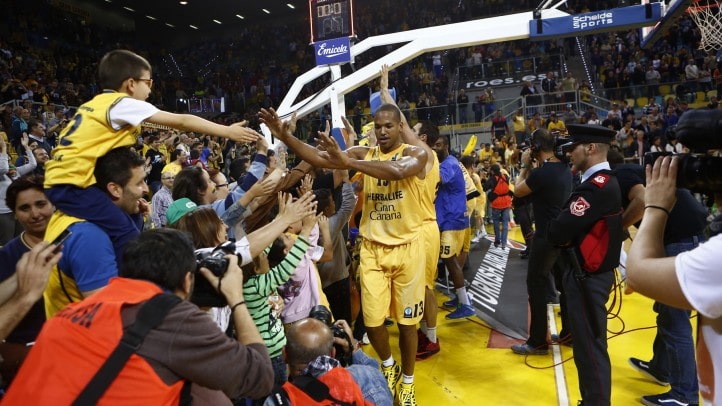 «Impressive road» to get to the first-ever finals

Historical moment for Herbalife Gran Canaria after reaching the Eurocup Finals. All members of the team were happy but also kept talking with humility.

Aito Garcia Reneses: «Logically, I am very happy because you don’t reach a final every day. I am very happy for my team’s performance throughout the Eurocup, our current players and some from the youth teams who helped us along the way. We left behind some teams that started the season in the Euroleague, some other who won domestic cup titles like Cedevita and Dinamo Banco di Sardegna Sassari, as well as Pinar Karsiyaka, which won the Turkish SuperCup this season and the Turkish Cup last year.»

«All that, added to the many wins that we got while playing a tough competition like the Spanish League, with a great number of trips, makes it fantastic. We beat Russian teams that rank high in the VTB League. It has been an impressive road and I have to congratulate my players. It is really difficult to make it to a final – none of the Euroleague teams managed to make it this far. In the end, it is down to Khimki and us. We have to celebrate what we did, take a breath and start thinking about Khimki.»

Edy Tavares: «We came out to play the game without thinking about our lead. We played with good intensity and concentration from the beginning until the end. D’or Fischer had a good game; he played better than in Game 1, but we always try to do the best we can. We didn’t think about the chance to reach the final until the fourth quarter. That was what [Coach] Aito told us. We thought about that only in the fourth quarter.»

Eulis Baez: «I never thought when I first arrived here to get into a final. But I knew that we would fight hard. We are a group of fighters and I’m very happy to be part of this family. It’s been an incredible ride this last three years here. But we have to keep being humble and working hard. We knew that we had to play the same we did in Kazan in order to maintain our lead. We played really well.