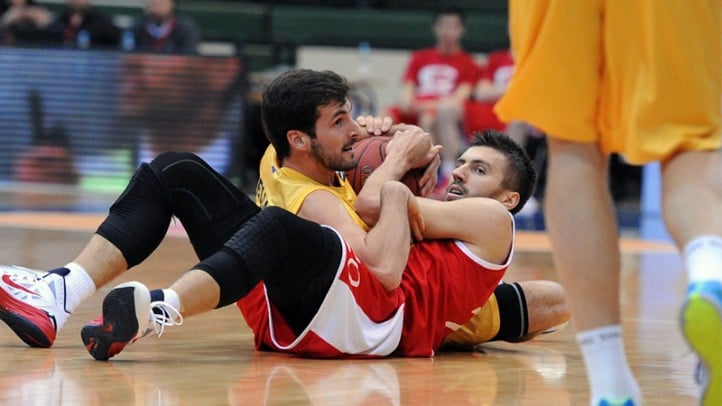 Herbalife Gran Canaria got closer to reach the Eurocup quarterfinals by downing Cedevita Zagreb 76-84 in Game 1 of the eighthfinals the Croatian capital on Wednesday.

Herbalife Gran Canaria takes an eight-point lead and hosts Game 2 next week. Brad Newley led the winners with 16 points. Tomas Bellas had 12, Kyle Kuric and Albert Oliver each added 12 while Ian O’Leary got 11 for Gran Canaria. Fran Pilepic led Cedevita with 18 points. Miro Bilan added 16 while Stanko Barac and Marko Tomas each had 10 for the hosts. An outstanding Bilan and a buzzer-beating basket by Marko Tomas gave Cedevita a 25-19 lead after 10 minutes. Kuric and Newley stepped up for Gran Canaria to make the guests get a 44-45 lead at halftime. Tomas Bellas led a 0-10 run that gave Gran Canaria a 49-55 margin but Cedevita got within 60-62 after 30 minutes. A three-pointer by Tomas tied it at 66-66 but O’Leary had 7 points in a 0-13 run which allowed Gran Canaria to return home with a very valuable lead in the series.

Eulis Baez got Herbalife Gran Canaria going with free throws, igniting a 0-7 run which Kuric capped with a three-pointer. Ivan Ramljak and Barac rescued Cedevita and a three-pointer by Pilepic tied at 9-9. Baez answered from downtown but a dunk by Ramljak and a layup by Marko Arapovic gave the hosts their first lead, 15-14. Bilan had 6 unanswered points and a buzzer-beating layup by Marko Tomas allowed Cedevita to extend its margin to 25-19 after 10 minutes. Walter Tavares and Oliver brought the guests within 27-26 early in the second quarter. An off-balance triple by Kuric and an alleyoop slam by O’Leary out Herbalife Gran Canaria back ahead, 29-31. A tip-in by Tomas and a corner three-pointer by Pilepic made Cedevita regain the lead, 34-31. Bellas and Baez stepped up for the guests but Bilan kept his team ahead, 40-37. Newley struck from downtown and followed Kuric’s jumper with another triple for a 44-45 Herbalife Gran Canaria edge at halftime.

Mario Delas hit a triple immediately after the break and a jumper by Pilepic gave Cedevita a 49-45 edge. Bellas and Newley struck from downtown in a 0-10 Herbalife Gran Canaria run that gave the guests a 49-55 margin. Pilepic took over with a four-point play and Tomas hit one from beyond the arc for a 56-57 Cedevita deficit. Bilan shined with a third-chance basket but Newley and Kendall kept the guests ahead, 60-62, after 30 minutes. Three-pointers by Roko Ukic and Tomas tied the game, 66-66, early in the fourth quarter. Herbalife Gran Canaria found a go-to guy in O’Leary, who had 7 points in a 0-13 run which Tavares capped with a slam, making Cedevita call timeout at 66-79. Pilepic and Barac sank consecutive jumpers and Tomislav Zubcic made the guests call timeout at 72-79. Oliver made sure to keep Herbalife Gran Canaria way ahead until the final buzzer.